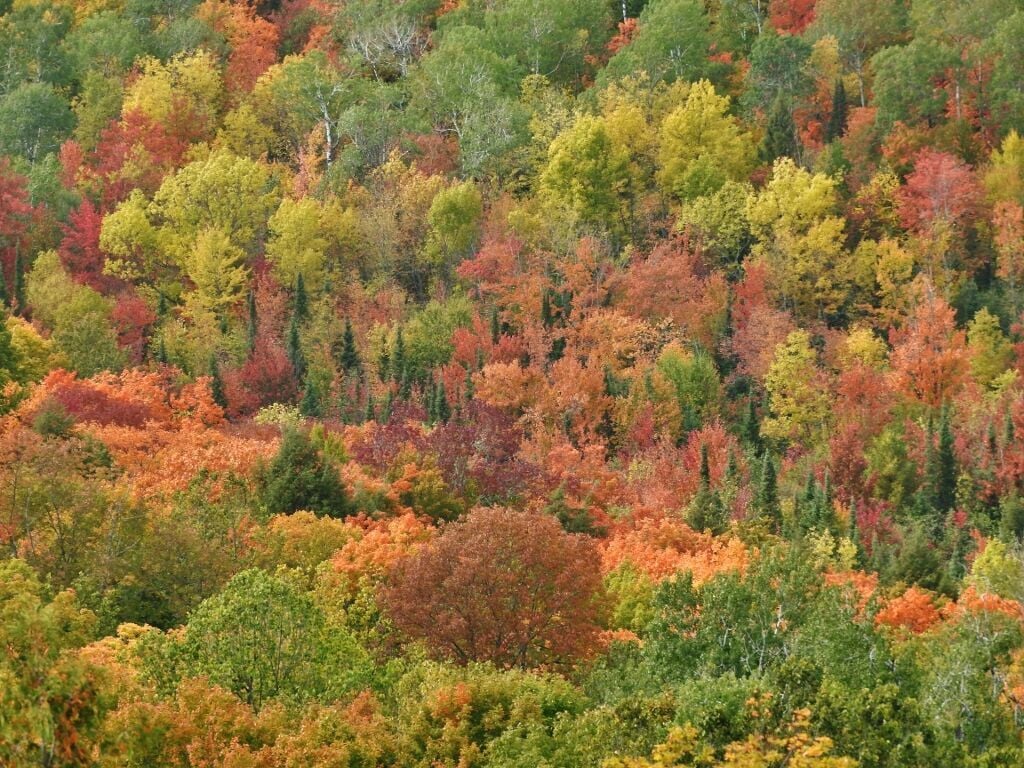 The view from St. Peter’s Dome in the Chequamegon-Nicolet National Forest in northern Wisconsin becomes a kaleidoscope of colors in fall. Photo by Emily Stone 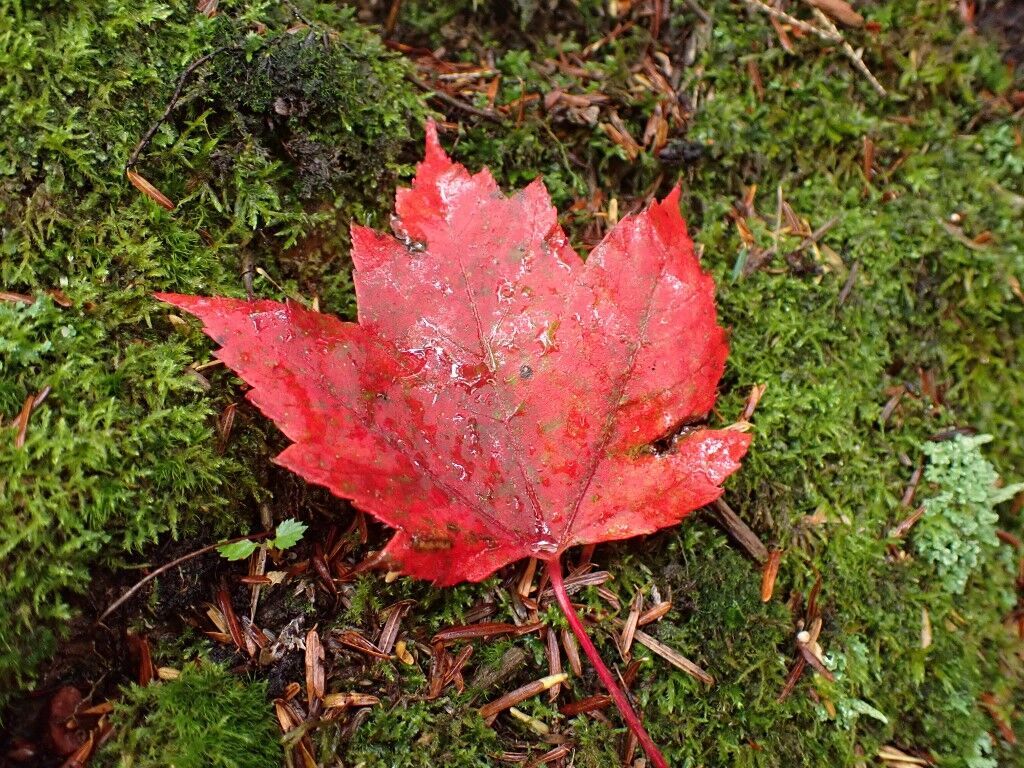 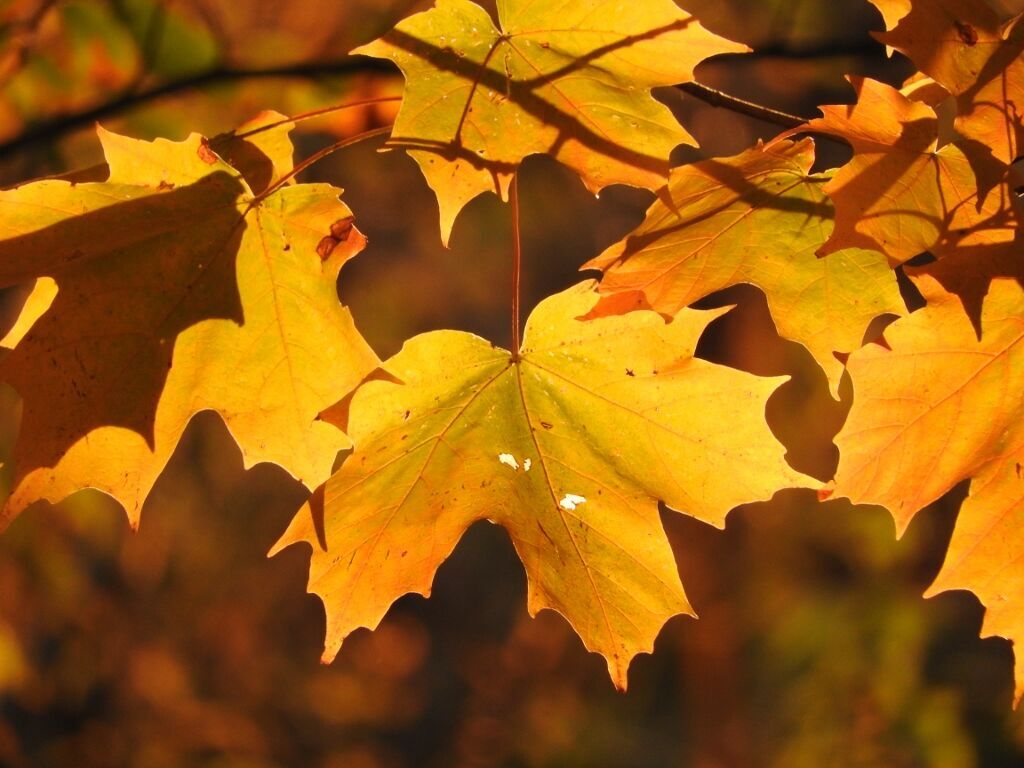 Tree leaves contain many colorful pigments that each play a role in photosynthesis. Once trees pull green chlorophyll out of their leaves, their yellow and orange pigments shine through. Photo by Emily Stone

The view from St. Peter’s Dome in the Chequamegon-Nicolet National Forest in northern Wisconsin becomes a kaleidoscope of colors in fall. Photo by Emily Stone

Tree leaves contain many colorful pigments that each play a role in photosynthesis. Once trees pull green chlorophyll out of their leaves, their yellow and orange pigments shine through. Photo by Emily Stone

We’re lucky to live in this swath of the continent known as the Northwoods, where fall colors are spectacular. Go a little south, or head farther north, and the forest changes.

According to John Pastor, professor emeritus from the University of Minnesota, Duluth, we have the extremes of our climate to thank for this autumn show. There’s something about the contrast of hot summers followed by frigid winters that encourages diversity in the shapes, colors, and lifespans of our trees’ leaves.

At the risk of being a killjoy, I’d like to remind you that fall colors are all about death. We’ll start with a sort of obituary then — an explanation of the leaf lives we lose every fall.

As soon as leaves emerge in early summer, the trees begin again to form new buds. The basic cells for leaves, as well as shoots and flowers, are neatly organized and packed tightly within protective scales or thick fur. When warmth and light return next spring, those buds burst and the leaves expand.

It takes a lot of resources to grow a new leaf, and then maintenance costs continue as long as the leaf is photosynthesizing. I envision a worksheet full of math problems. Each species-specific equation contains different negative numbers representing the costs of tissue construction, maintenance, and reproduction. They also include various positive numbers of productivity. The answers, though, would all be the same: something just above 0.

Leaf shape is part of those equations. In his book “What Should a Clever Moose Eat?” Pastor put a number on it: 80% of deciduous species in the Northwoods have leaves that are either toothed or lobed. The correlation between leaf teeth and cool climates is so pronounced that paleoecologists use the percentage of toothed leaves in fossil plant communities to back-calculate prehistoric temperatures.

On the surface, it seems like a pretty random correlation. But scientists have determined that toothed leaf margins rev up their sugar factories faster in early spring than smooth leaf margins, thereby extending the growing season. The teeth also lose water at a higher rate.

That isn’t usually a problem during our Northwoods mud season, but during this dry summer I noticed that birch leaves were turning brown from lack of water. When leaves crumple from drought, we see brown tannins in the membranes of dead cells.

Leaf lifespan is another variable in the equation. The more it costs to build a leaf, the longer it takes to pay off the overhead.

As sunlight wanes in late summer, it’s time to close down the photosynthesis factories of leaves. Now the trees must try to salvage what they can. Nitrogen and phosphorus are sucked back out of the leaves and into the twigs, where they’ll remain on-deck to fuel next spring’s leaf growth. The tree benefits from storing N and P above ground, because the twigs thaw long before the frozen Earth releases her nutrients.

Finally, we’ve arrived at the onset of fall colors. Of course, they were there the whole time. All summer long, vibrant green chlorophyll was the star of the show, and outshone all the rest. As chlorophyll breaks down and is resorbed, though, its trusty sidekicks are revealed.

Orange carotene pigments captured wavelengths of light that the green chlorophyll could not, and then transferred that energy over to help fuel photosynthesis.

Yellow xanthophyll pigments absorbed dangerous excess energy in the leaf and dissipated it as heat. This prevented cell damage, and warmed the surrounding environment.

Red comes next. Once the phosphates have been resorbed into the twigs, sugars in the leaves break down and form anthocyanins. Anthocyanins absorb UV light, especially at low temperatures.

Like sunscreen, the pigments protect the leaf cells while they finish sending their nutrients back to the twigs. They can be blue or purple, but their most conspicuous form is red. Red is the only fall color that is created and not just revealed.

To create anthocyanins you need lots of sugars, which means a summer with dependable soil moisture. This year, that may only have occurred in select habitats with naturally wetter soils. In contrast, cool, dry fall weather is essential for good colors, because rain literally washes the color out of the leaves — leaching pigments and sugars from dying cells.

While the forest becomes a rainbow, the deciduous trees are quietly growing several layers of cells across the base of the leaf’s stem where it is attached to the twig. Jack Frost doesn’t kill the leaves, because the trees themselves do. Finally, the abscission layer weakens the leaf’s hold on the tree just enough that a stiff breeze can whisk it away. That’s it.

The Northwoods slides into the gray depths of winter, brightened only by the highly invested evergreens. Summer can’t last forever, but neither can fall, winter, or spring.

Next year, we’ll get to watch the kaleidoscope of colors play across the landscape all over again.