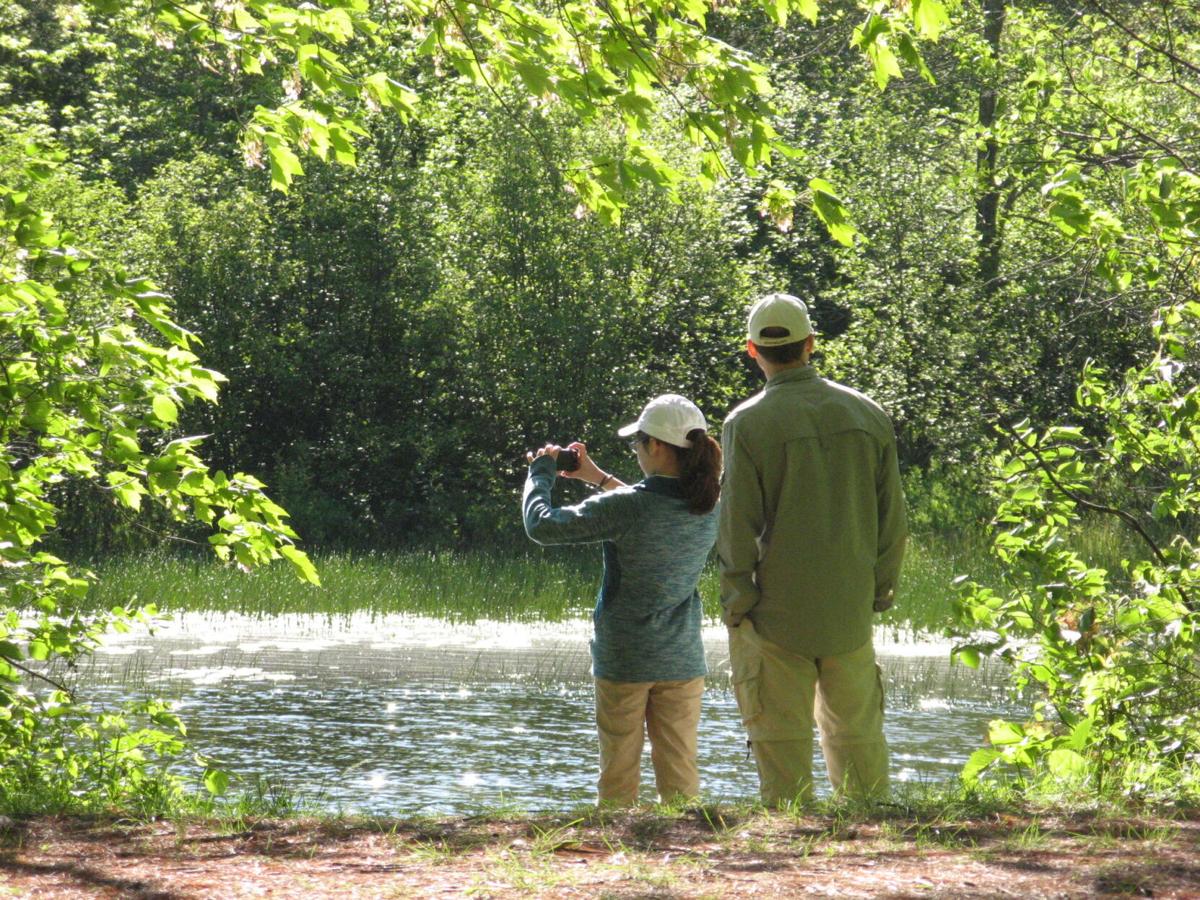 Katie snaps one more photo while admiring the Namekagon River with her dad. Photo by Emily Stone 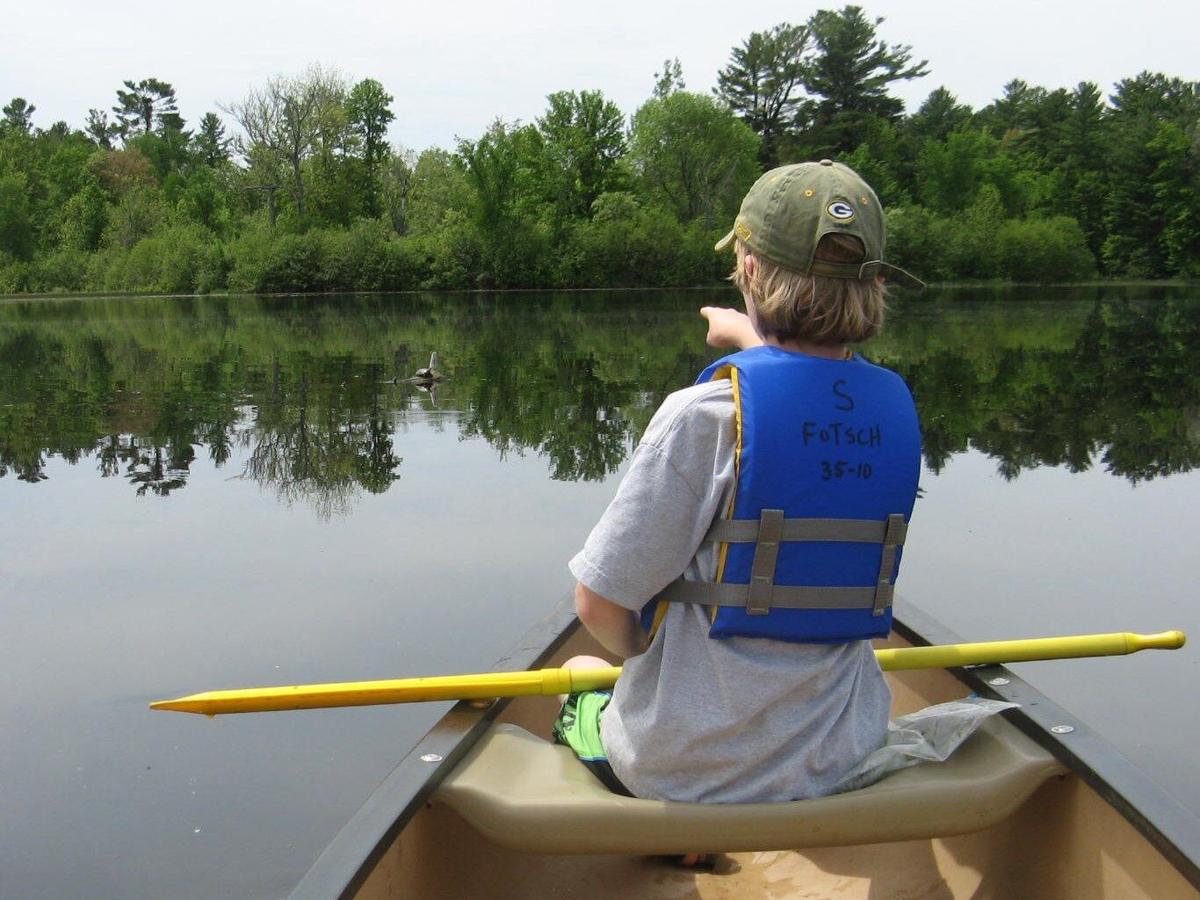 Grant points out a turtle on a log on the Namekagon River. Photo by Emily Stone

Back in 2013, I took a group of kids on a paddling trip down the Namekagon River. Lately, I’ve been thinking back on that trip, and this week I’d like to share that experience with you again.

As the six kids gathered at the river landing, I saw looks of shyness, uncertainty, and excitement. The paddling lesson brought looks of concentration and some confusion, then boredom when they got it. As John Kudlas, our favorite river ecology instructor, taught about water quality, the faces of these mostly sixth and seventh graders showed focused interest. Here, with school out and a classroom without walls, I could see them learning.

Before embarking, we dipped our nets into the riffles and caught macroinvertebrates (the immature stages of insects that spend part of their life in the water before gaining wings and flight). As water quality indicators, the species we caught showed that the river is healthy.

As we paddled, I noticed marsh marigolds in bloom (it was June), scouring rushes starting to poke up through the water surface, and a couple of dragonflies. Birds sang from every bush and tree in a cacophony of joy, aggression, alarm, and plain chattiness.

I marveled at the bald eagle, sitting calmly in the white pine as we floated underneath. I noticed the power and grace with which the great blue heron rose from its hunting spot. I observed the many aquatic plants still just barely breaking the river’s surface, while last year, with the early spring, they had been in bloom or already gone to seed.

But what do the kids see? Sometimes I worry that in this age of television, video games, and internet, kids will lose interest in nature, and lose the ability to notice things in the unfamiliar complexity of the wild.

So I was excited when, at the campsite on our second morning, the kids took the small digital cameras I gave them and eagerly disappeared into the woods to take photos. Besides giving them an excuse to look closer, compose a frame, and enter our photo contest that summer, it also gave me a glimpse behind their eyes.

What did they notice?

The first photos on each camera show smiling faces as the kids “labeled” their cameras with a self-portrait. Then came the images of sparkling water and green trees, sunlight glinting off the rapids the kids were all eager to run, and the river disappearing around the corner into the great unknown.

The photos show close-ups of bugs — a dragonfly and stonefly that came to visit our picnic table. We’d found the aquatic nymphs of both insects with John the day before. One photo even shows a backlit oak leaf, its veins and chlorophyll glowing in the morning sun.

The fascinating patterns made by leaves in a patch of jewelweed must have captured the attention of one youngster who used their juicy stems to sooth mosquito bites. His observant eye also caught psychedelic reflections of light and leaves on a pool of water between three rocks.

Looking over and up

Here we saw a proud angler, pole and tackle box in hand; there we saw his sister, stretched out on her belly, taking photos from an ant’s-eye view. On her camera, I found that photo of the grass jungle, each delicate seed head silhouetted against the clear blue sky. Other, taller bunches of grass arch gracefully in the morning sun.

For a different view, several kids looked up into the trees, and caught the magnificence of old growth white pines reaching their gnarled branches to the sky. Then they looked down, and captured gaywings (small, hot-pink wildflowers) in ethereal morning light, and pure white starflowers against the backdrop of a fallen log.

Some photos were blurry, a few were crooked, and some included the photographer’s thumb, but overall, I was thrilled. These kids could still see nature. They will be our next generation of scientists, conservationists, journalists, and engineers. Their ability to see nature will help make sure that it is not overlooked.

I don’t get to lead another canoe trip for kids this summer, but I am excited to see the world through the eyes of others again. The Museum’s Northwoods Babies Photo Contest just opened for submissions, and photos from kids and adults are already rolling in. Between now and Sept. 1 (the submission deadline) I hope to see gaggles of goslings, backyard fox kits, and hungry caterpillars pour into my inbox.

We’re holding the photo contest to get everyone thinking about what it’s like grow up wild in the Northwoods — which is the subject of next year’s exhibit. The public will be able to vote on a People’s Choice award on our Facebook page next week. To find all of the rules and instructions, visit cablemuseum.org/photo-contest.