Margaret Ann ‘Peg’ Boles, age 91 of River Falls died December 18th 2021 at the Hudson Medical Center. Peg was born on July 26, 1930 in River Falls; the daughter of William and Clarice (Nelson) Olson. She was raised in River Falls where she graduated from high school. She was united in marriage to Donald “Bucky” Boles. This union would be further blessed with five children. Margaret will long be remembered for her hospitality and home cooking as she and Donald owned and operated the Boles Café in River Falls for many years. She loved to cook and bake. It truly was a family run business as everyone helped whether busing tables, deliveries, or helping bake her famous Christmas cookies. They would later close the café but she did not retire from the restaurant business. She would work for Earl Hanson at Hanson’s Café in River Falls for several more years. Sadly, Donald would precede her in death in 1991.

Peg’s greatest joy came from the laughter and presence of seeing all of her family being together. She loved time at the cabin on Lake 26 near Danbury and playing Uno or Skip Bo cards with the grandchildren. And when Sundays rolled along, you bet it was cheering on her favorite green and gold to a victory; but only after attending church! Her faith played an integral part of her life, especially in how she raised her children. She was a devoted member of Ezekiel Lutheran Church. 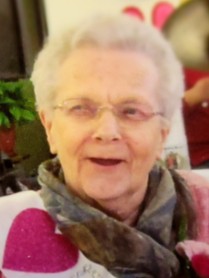