Ethleen “Sandi” Belisle was born in Minneapolis, MN on January 11, 1930, to Leona Erickson Sandell and George Albert Sandell Jr. She passed away peacefully on August 5, 2021. Sandi was one of six children. At the age of 20 she met her soul mate, Doyle J. Belisle of Somerset, WI. They were married in Fort Bragg, NC, on May 5, 1951, shortly before Doyle left to serve in Korea. Sandi and Doyle reared seven children in Somerset. After she and Doyle retired, they purchased a motor home and enjoyed travelling the country together. In the meantime, they bought their retirement home on a lake in Colfax, WI. After selling the motor home and the lake home, they built a home in Eau Claire where they lived for the past 20 years. She is survived by her husband of 70 years, Doyle, and their seven children: Dianne, Thèrése (Laurie), Nanette (Larry), Yvette (Rick), Doyle (Joan), Douglas (Tamera) and Wendy (David); her beloved sisters, Leona “Sugar” Scheiller and Mary Sandell; her brother Leonard “Lenny” Sandell; and sister-in-law, Carol Sandell. She was the delighted grandmother to 18 grandchildren and 22 great-grandchildren and many extended family members and friends. She was preceded in death by her mother, Leona Sandell; father, George Sandell Jr.; mother-in-law, Violet Belisle; father-in-law, Paul Belisle Jr.; sister Georgette Kitchin and husband Danny Kitchin; sister, Jeanne Aubol; sister, Joan Blanche; brother, Jim Erickson and wife, Marge; brother, George “Sonny” Sandell III; brother-in-law Cecil Scheiller; nephew Eddie Kitchin; and Raven Marchetti. 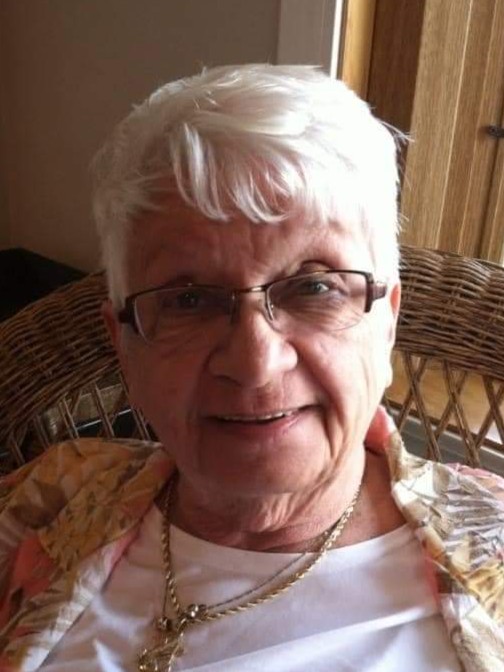