Skip to main content
You are the owner of this article.
Edit Article Add New Article
You have permission to edit this article.
Edit
Home
Local News
Things To Do
Sports
Obituaries
Opinion
Classifieds
Preferred Business
OMGHired Local Jobs
About Us
Magazines
Advertise with Us
1 of 17 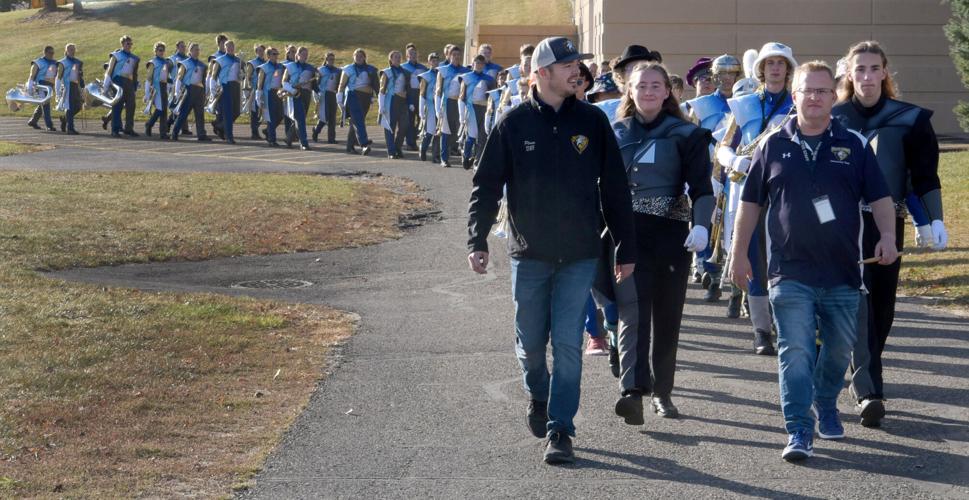 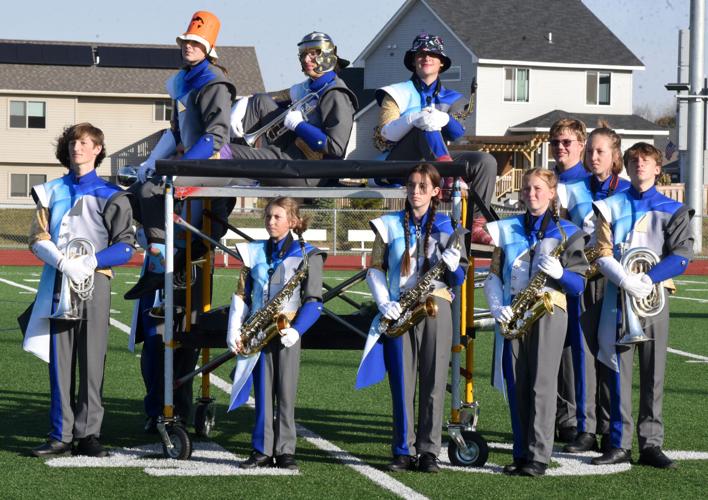 The horns section lines up before the performance of "The Greatest City." Jim Johnson/Star-Observer 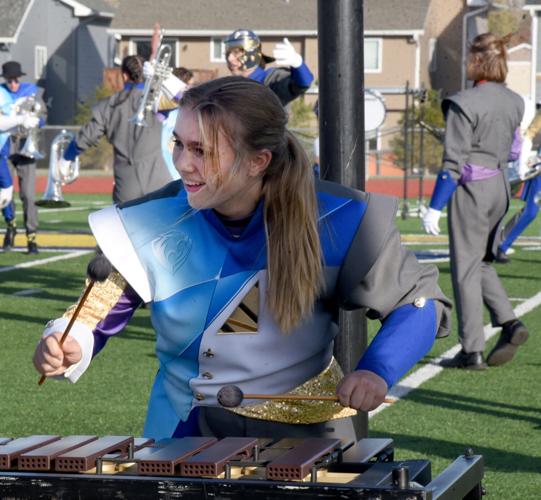 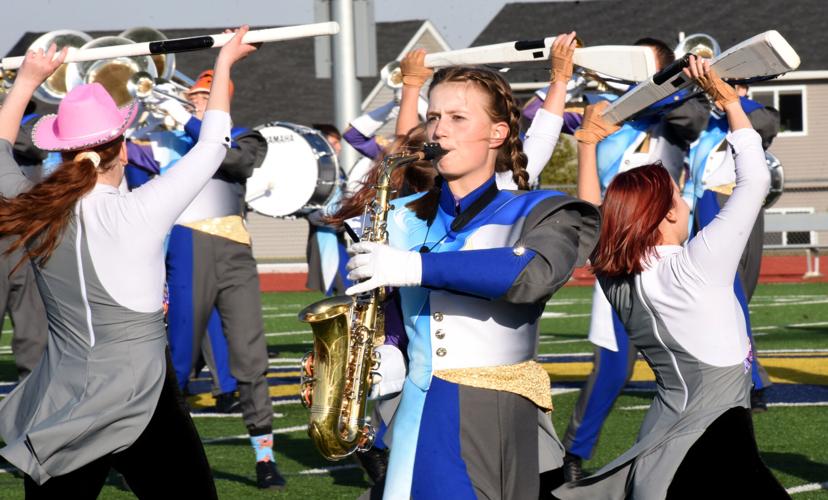 Anika Loy plays the saxophone as the the River Falls Marching Band performs its state championship winning routine for parents and friends at the high school on Saturday. More than 250 people packed the stands and lined the field to watch the performance. Jim Johnson/Star-Observer 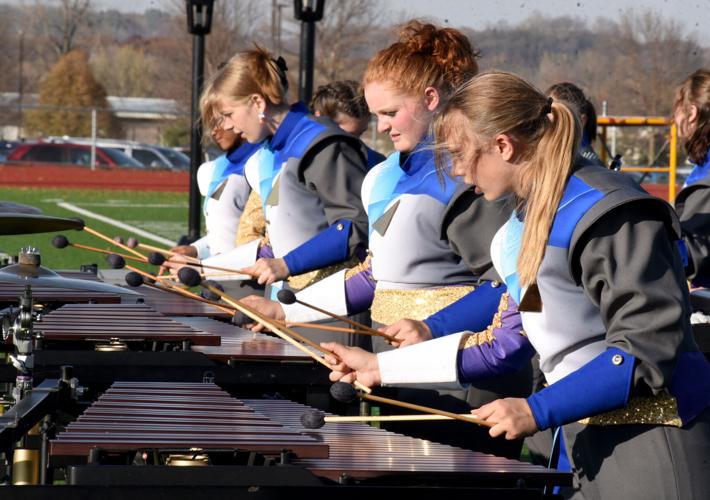 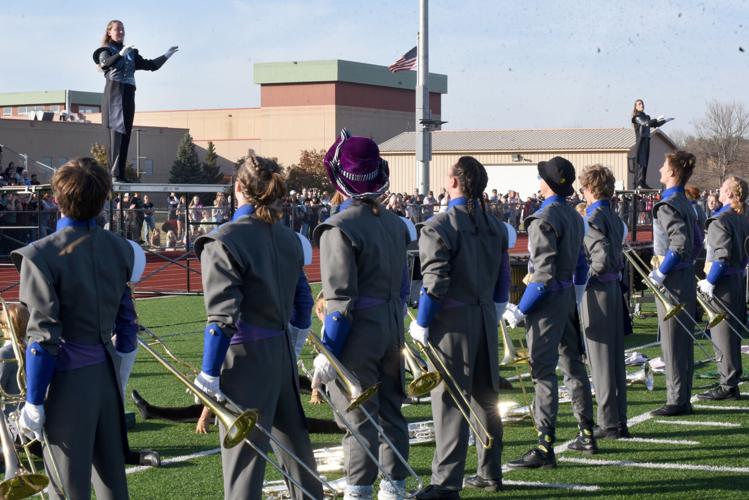 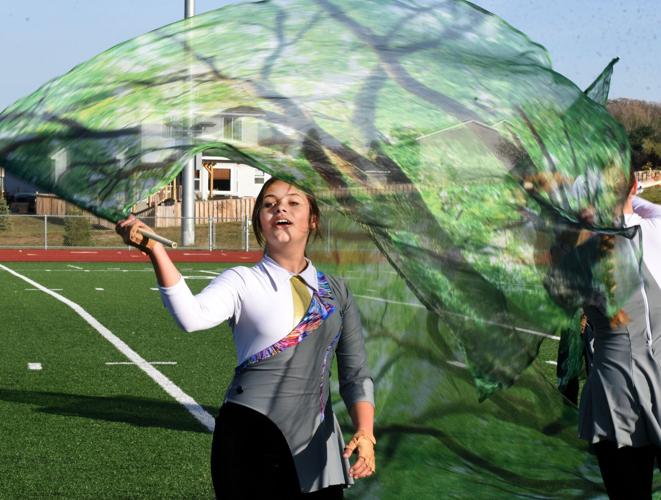 Ava Kleist is framed by her twirling flag as part of the color guard routine, which was named best in the state. Jim Johnson/Star-Observer

The band lines up in front of the school following a Saturday afternoon performance. Jim Johnson/Star-Observer 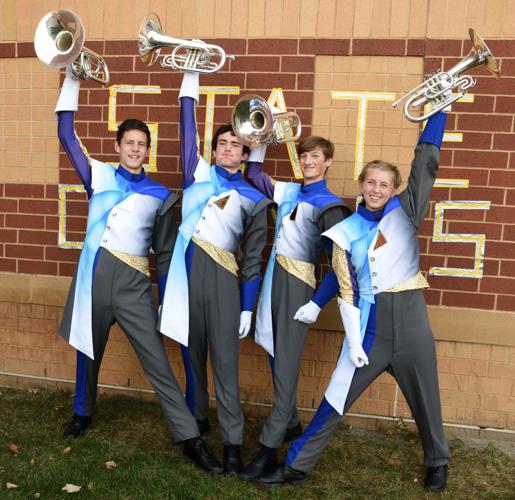 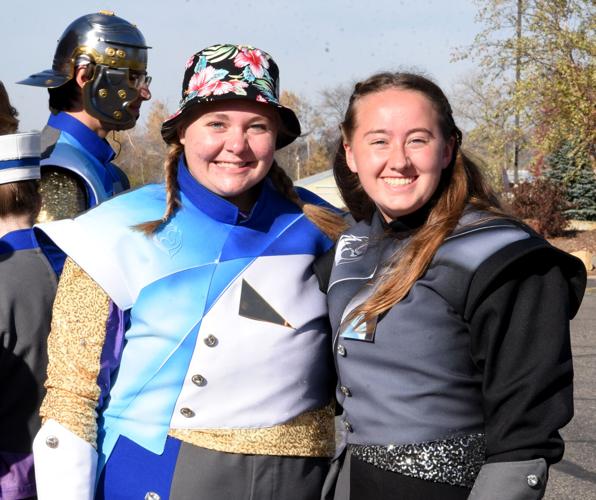 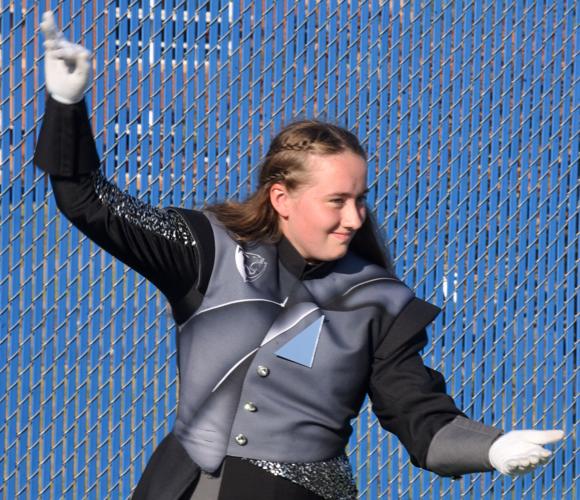 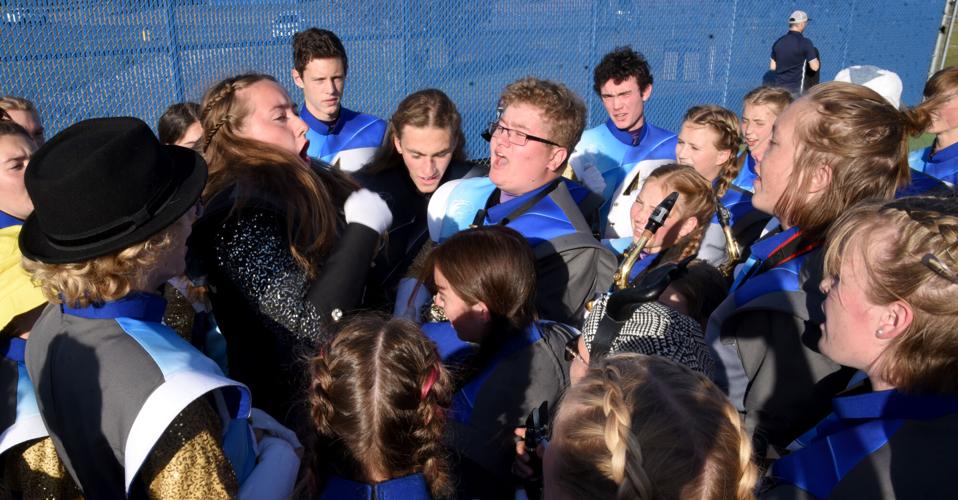 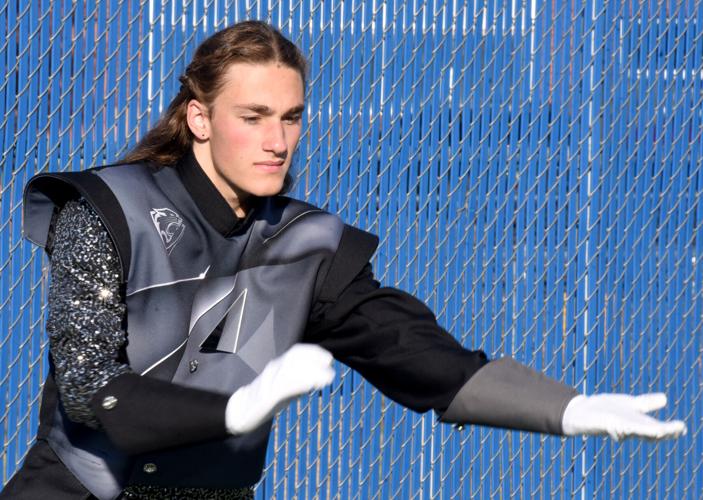 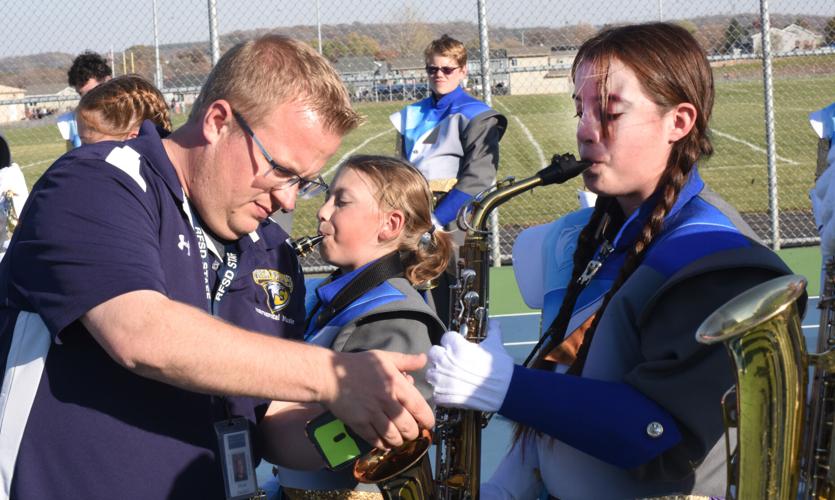 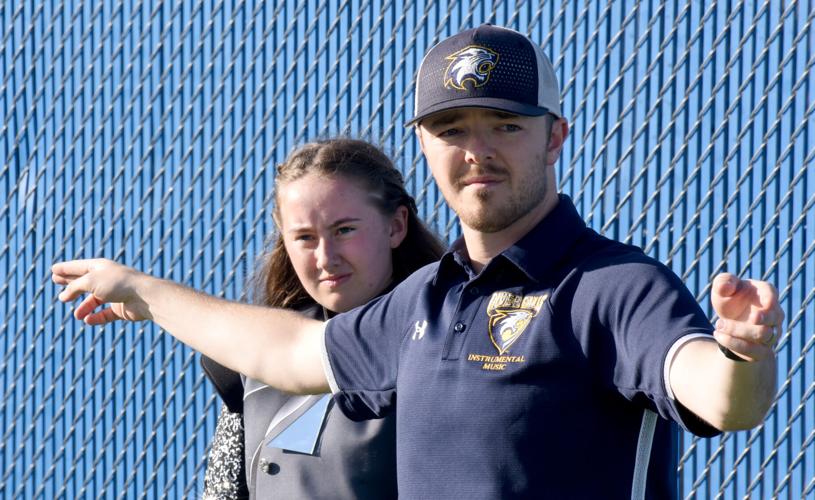 Band director Alex Plum tunes up the band before a performance. Jim Johnson/Star-Observer 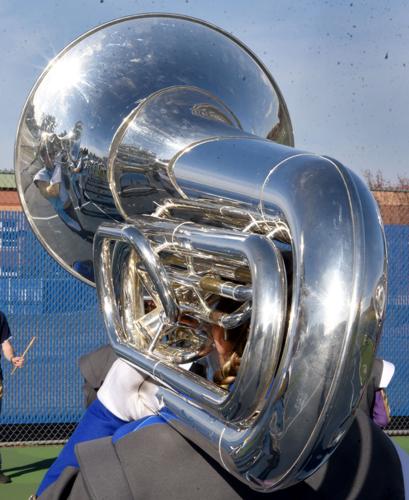 Fellow band members are reflected in the bell of a tuba during a band warmup exercise. Jim Johnson/Star-Observer

The horns section lines up before the performance of "The Greatest City." Jim Johnson/Star-Observer

Ava Kleist is framed by her twirling flag as part of the color guard routine, which was named best in the state. Jim Johnson/Star-Observer

The band lines up in front of the school following a Saturday afternoon performance. Jim Johnson/Star-Observer

Band director Alex Plum tunes up the band before a performance. Jim Johnson/Star-Observer

Fellow band members are reflected in the bell of a tuba during a band warmup exercise. Jim Johnson/Star-Observer

River Falls High School student Olivia Bartkey couldn’t hold back tears as the final notes rang out. She stood on the field in Whitewater, Wisconsin, with the River Falls marching band. The band did not know it yet, but they had just won the 24th state championship for the school.

As a senior, Bartkey was one of many students who had just performed in their final state championship, this time with their performance of “The Greatest City.”

She left the field with an emotion of sadness, knowing she will never play with these students again.

“I broke down, knowing this is the end. At the same time it was bittersweet,” Bartkey said.

Those emotions returned when it was announced River Falls once again won the championship.

The foundation for success – and the tradition of winning – began in 1980, when Director LeRoy Lee began his tenure. During his 15 years as director the program won 11 championships.

In addition to winning, Lee began a streak of 35 consecutive years of participation in the state championships, the only band in the state to hold such a distinction.

“It’s a legacy here. When we go to state, other schools know who we are,” student Drew Simonson said.

Simonson is a senior who plays trumpet. Like many other students, he got involved with the marching band because of family.

Simonson has been around marching band since he was 10 years old when his brother joined. He had a sister that went through the program, fueling his passion to keep the marching band tradition in the family.

“It was always an interest to me. I knew I wanted to join,” he said.

Simonson began his band journey in sixth grade. He joined the marching band as a freshman. In the four years since joining, he has collected three state championships and made countless memories.

Director Alex Plum said it is common for students to join the band program in sixth grade. He said when students are in eighth grade they learn about the marching band with an option to join when they are freshman in high school.

Students play together for three years before joining the marching band.

“It’s emotional because you have spent the last four years with your band members. To walk off the field knowing it’s all over is really sad,” senior Claire Vaught said.

Vaught’s involvement with marching band is similar to others. Her family has been involved with band since she was a child. Following her siblings’ footsteps, she joined band in sixth grade.

“It was a core childhood memory to go to marching band performances for my two sisters. I knew I wanted to play because of them,” Vaught said. “When I was in eighth grade, I went all in. I was fully involved.”

Vaught said she was emotional leading up to the final performance. She worried about the performance before taking the field. Those worries faded after getting in the proper “headspace” to play.

That mental preparation begins with a motivational huddle with bandmates while the drum major pumps them up. She goes through final preparations with her fellow trumpet players.

The result was a championship performance.

“After we were done, I kind of knew we were going to win,” she said with a smile.

The winning mentality is part of the championship pedigree for the program.

Building championship lineage takes years of success, hard work and dedication. For the marching band the dedication begins in August with “Drill Week.”

The summer work has the band outside for eight hours a day, five days a week. It can be grueling and agonizing as temperatures reach 100 degrees as they perfect their routine.

“It’s the worst but also important because everyone bonds over the practices,” Bartkey said. “As a leader I tell the underclassman, ‘This is the worst it gets. If you can survive this you can do anything.’”

Vaught said Drill Week can be frustrating but rewarding. Her message to freshmen is “never give up.”

“It’s easy to lose sight and have your mindset shift. Once it all clicks and you see the progression it’s remarkable,” she said.

The marching season is a rollercoaster. The band begins drilling in the heat and finishes with the state performance in October when temperatures can plummet.

“Having Drill Week sets the tone for the program and the year. It makes the hard work worth it,” Bartkey said. “I feel that is a reason why the program is successful.”

Josiah Domeyer is a junior who will play for one more year. He joined the marching band because of his older brother.

“He is someone I looked up to, so when he and my other siblings joined I knew I had to join too,” he said.

Domeyer is happy he won the championship but is sad it’s over for the year. He is excited for next year when he can mentor the younger students.

“Fostering growth is part of the culture and is a reason we are successful as a program. You build those relationships over the years and it pays off,” he said.

Domeyer is proud of his role in the marching band. With one year left, he reminds himself to think about the history, tradition, legacy and culture built by those who came before him.

“I hear former songs from over the years, and I reflect on those moments. It’s a mixture of happiness and sadness because it was something I was happy to be a part of but also sad because it will never happen again,” Domeyer said.

Representing the senior class, Bartkey, Simonson and Vaught agreed they are proud to wear the Wildcat uniform.

“I love this program. I’m proud to be a Wildcat. It made high school fun,” Vaught said.

Simonson said he’ll remember being part of a family. Besides being proud, he is sad to leave the program but knows current leadership has the tools to make future generations successful.

“Having an activity that builds community will shape you for the rest of your life. I’m glad to have been a part of this community,” Simonson said.

Bartkey doesn’t regret her decision to join the program. She echoed the thoughts of Vaught and Simonson. She’s sad it’s over.

When Bartkey was a freshman she began a tradition. As a bass drum player she asks her fellow percussionists to sign the drum head at the end of the year.

Each signed head reminds her of a different year.

It will remind her of the time she left the Whitewater football field in tears as a state champion.

“The names have changed over the years but the spirit has not,” she said.

How it comes together

Director Alex Plum said the process for selecting the marching performance begins in December. The design team consists of Directors Plum and Bryan Jaeckel, our winds arranger, drumline arranger, front ensemble arranger, drill writer, color guard instructors and various other music and visual staff that work with the band throughout the season.

“The show can start from a small idea such as a theme, a story, a piece of music etc that we put on paper and see where it develops,” Plum said. “The team selects a few show ideas that can incorporate musical and visual concepts.”

Once an idea has been selected, it gets developed. The development includes writing the music and drill. Students learn the music before summer.

Plum said the music gets put onto the field in July where students learn the different movements. He said the band learns the standard five movements: opener, second movement, ballad, percussion feature and a closer.

The next several weeks are spent perfecting the performance.

Plum and Jaeckel were responsible for directing 106 students this year. Plum said about 150 students are in the band program but only a third are in the marching band.