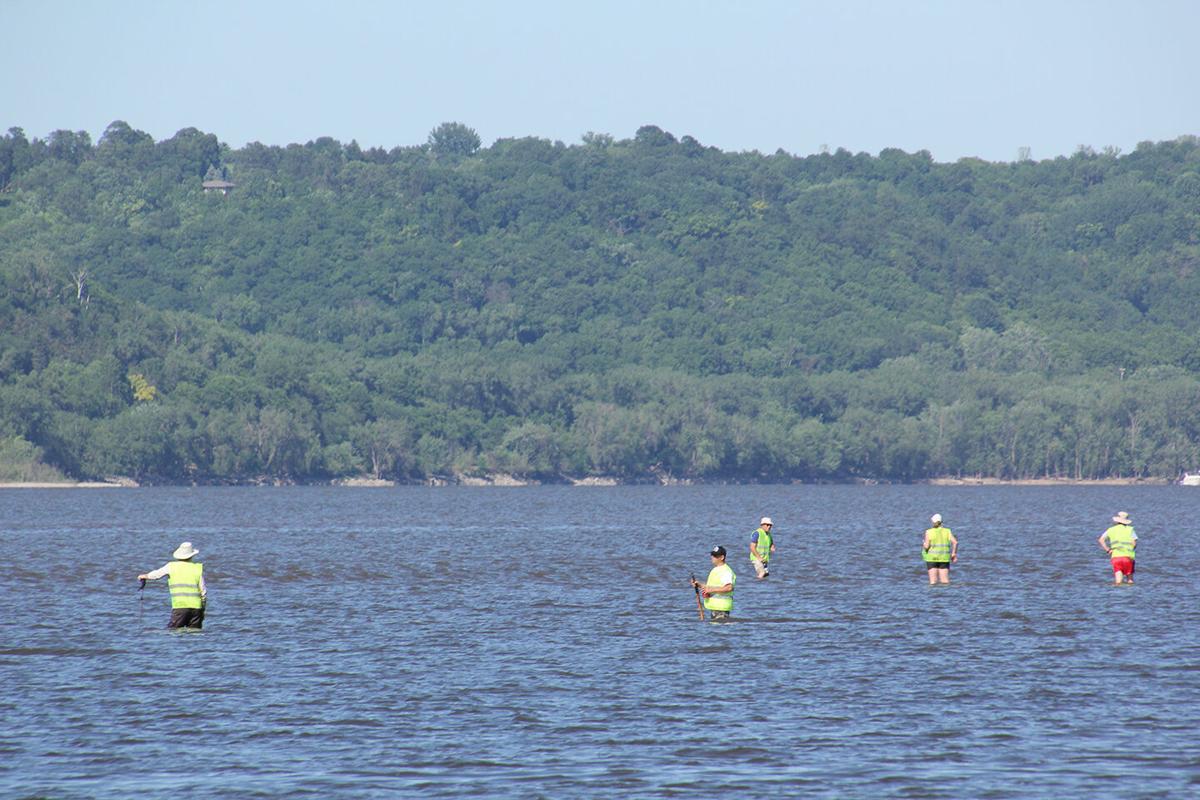 Members of the Lake Pepin Legacy Alliance walk across sediment layers in Upper Lake Pepin to demonstrate how shallow the water is and why there are so many boat groundings in recent years. Steve Gardiner / RiverTown Multimedia 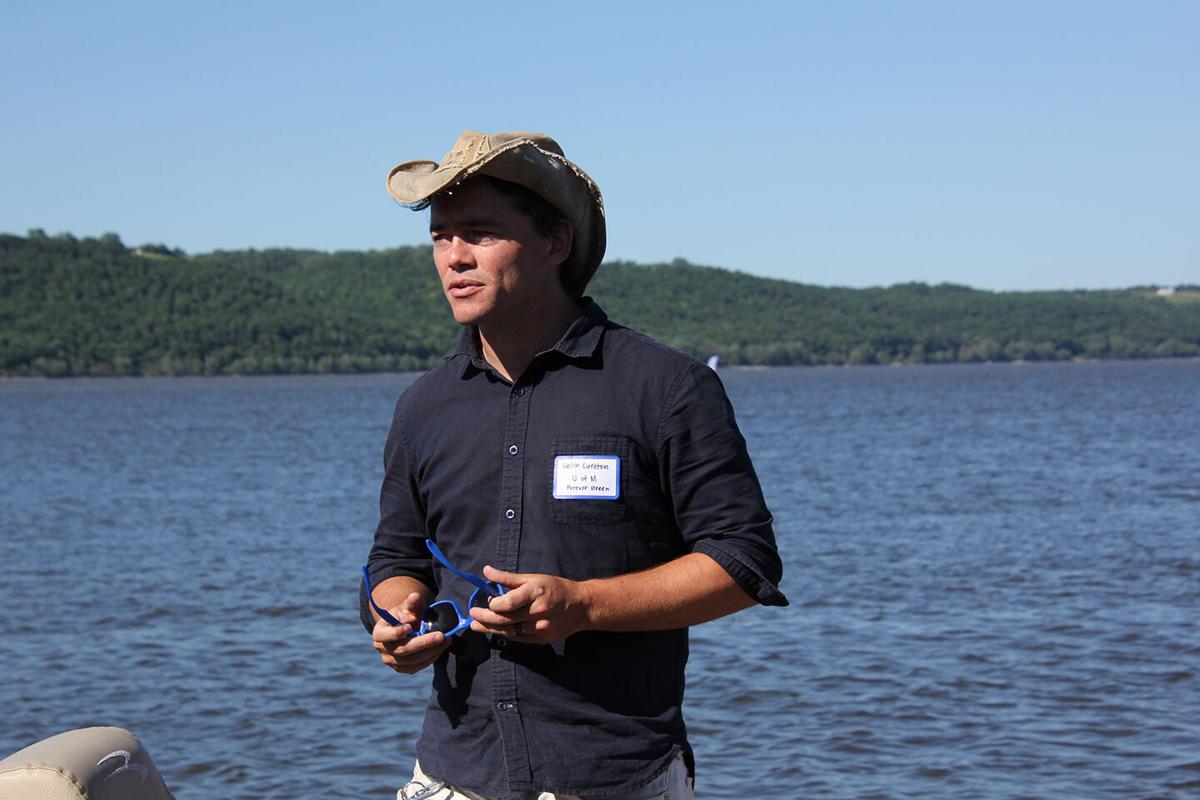 Colin Cureton from the Forever Green Initiative talks to elected officials during a boat tour of the proposed reconstruction project in Upper Lake Pepin on June 12. Steve Gardiner / RiverTown Multimedia 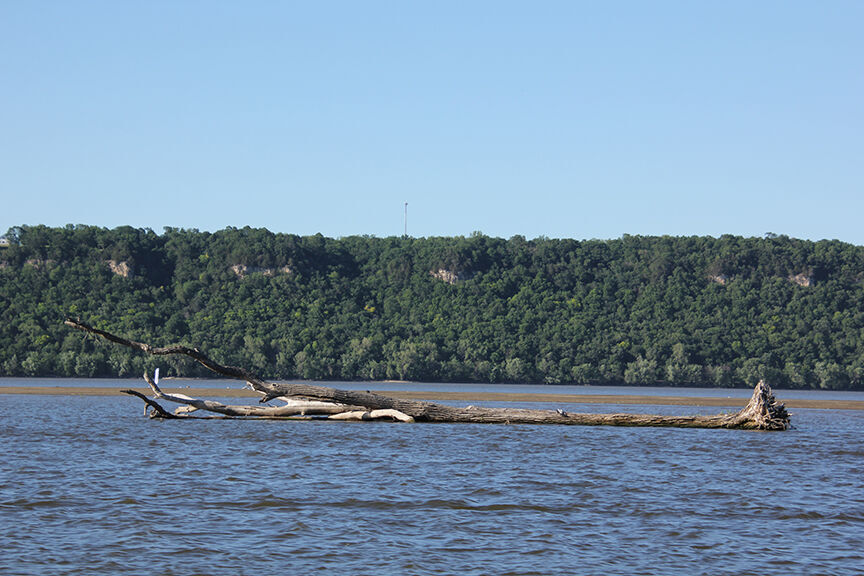 A grounded tree rests in front of the sand bar that extends off the south end of Lighthouse Island. Steve Gardiner / RiverTown Multimedia 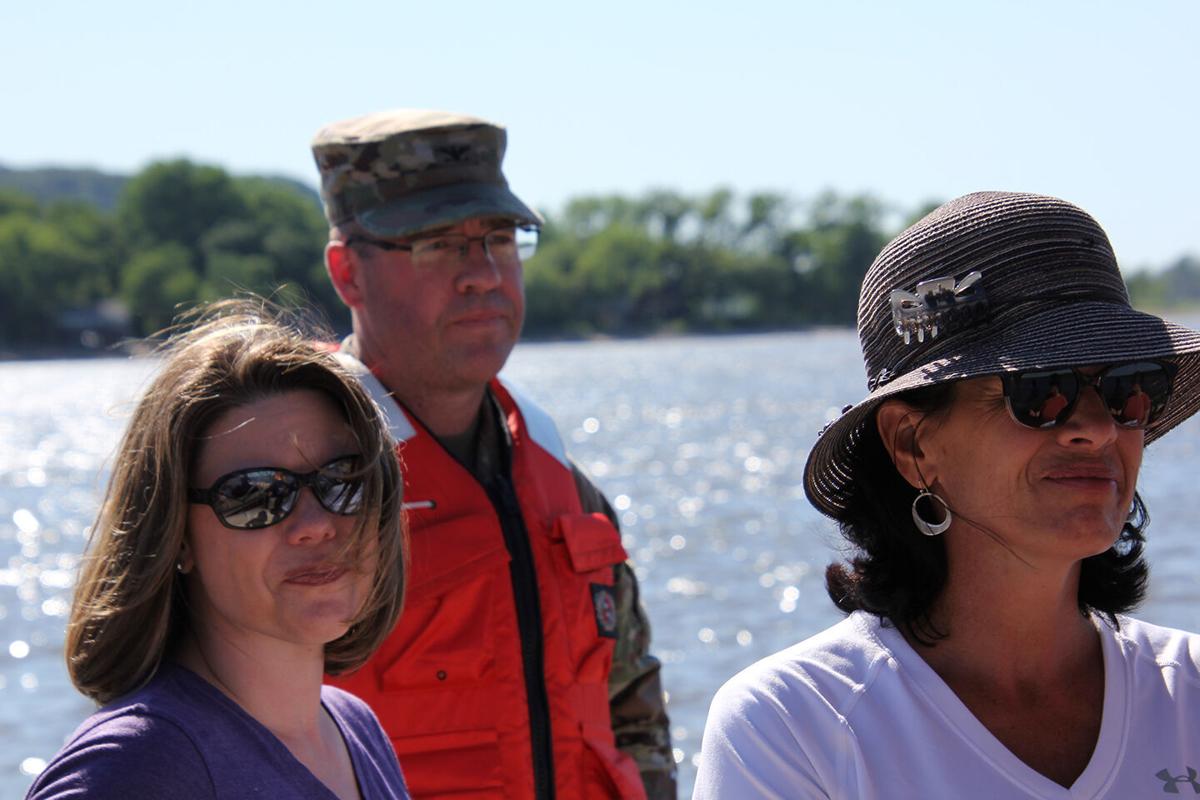 Members of the Lake Pepin Legacy Alliance walk across sediment layers in Upper Lake Pepin to demonstrate how shallow the water is and why there are so many boat groundings in recent years. Steve Gardiner / RiverTown Multimedia

Colin Cureton from the Forever Green Initiative talks to elected officials during a boat tour of the proposed reconstruction project in Upper Lake Pepin on June 12. Steve Gardiner / RiverTown Multimedia

When Colin Cureton asked members of the Upper Lake Pepin Boat Tour, sponsored by the Lake Pepin Legacy Alliance on June 12 what the No. 1 agricultural export from Minnesota was, he got the answers he expected.

Corn. Soy beans. No, he said, admitting that it was a trick question.

The answer is soil, said Cureton, who works on the commercialization team with the University of Minnesota’s Forever Green Initiative.

“In 2020, we had 1.4 billion bushels of corn harvested,” he said. “That works out to about 80 billion pounds of corn. The average acre of row crop agricultural land loses about four tons of soil per year. We have about 25 million acres of agricultural land, so that works out to about 200 billion pounds of soil per year. That’s two to three times as much soil as corn. That’s an incredibly valuable resource. We export it for free, and it’s not coming back, at least not in our lifetime.”

The first two stops for the three-boat tour were near Lighthouse Island, a site that has seen frequent boat and barge groundings in recent years. The area below the island has changed dramatically over the years from sediment deposits and several LPLA members were walking on the sandbars to show boat tour members that the water is so shallow, they could walk all over the area.

“We watch the barges slow down and go so carefully through this area, because it is so narrow and so shallow on either side,” said Riley Hince, executive director of the LPLA. “For reference, the channel is about 100 feet narrower than it’s authorized.”

Dredging the channel to keep it to specifications in an ongoing challenge, Hince explained. Tons of material are removed from the channel each year, and that dredged material must be placed at a local site to dry for a year or two before it can be moved to another location.

“This is not an issue that is going away,” Hince said. “The sediment will continue to come downstream. We really need innovation, and we need collaboration.”

That’s where Cureton and the Forever Green initiative is hoping to help. Cureton said he works with over 100 scientists who are developing different crops to help keep topsoil in place. One of those grains, Kernza, has proven successful, and tour members were given salad samples and cookies made from Kernza.

Kernza is the first commercially successful perennial grain crop, Cureton explained, and its other benefit is a very deep root system.

“The dense root system extends down about ten feet,” he said. “The average wheat plant goes down about one foot. With it being perennial, you’re not out there tilling and planting every year. Farmers can save money, but can also keep that topsoil in place. It also virtually eliminates nitrate leaching which keeps those nitrates out of the rivers.”

The Forever Green Initiative is looking for ways to help farmers overcome the risks of changing their crops and farming practices.

The combination of soil loss and problems of river sediments being deposited in the Upper Lake Pepin area were what inspired the reconstruction project in the area of Lighthouse Island and Bay City. The project will cost $20 million, but most of the funding is already in place and the U.S. Army Corps of Engineers has already signed on to do the work, according to Brenda Kelly, project manager with the Wisconsin Department of Natural Resources.

The sediment issues have caused a loss of aquatic areas, wildlife habitat, floodplain forest, she explained. The Pierce County Islands Complex, as the project is called, will attempt to restore those lost resources.

Although Kelly does not have an exact date when the project work will begin, the progress made by LPLA, the Corps of Engineers, the DNR and other participants makes it look like equipment will be on site in 2022.

What is the Lake Pepin Legacy Alliance?

Lake Pepin Legacy Alliance is dedicated to saving Lake Pepin, which is the widest section of the Upper Mississippi River and located between Minnesota and Wisconsin.