Skip to main content
You are the owner of this article.
Edit Article Add New Article
You have permission to edit this article.
Edit
Home
Local News
Things To Do
Sports
Obituaries
Opinion
Classifieds
Preferred Business
OMGHired Local Jobs
About Us
Magazines
1 of 2 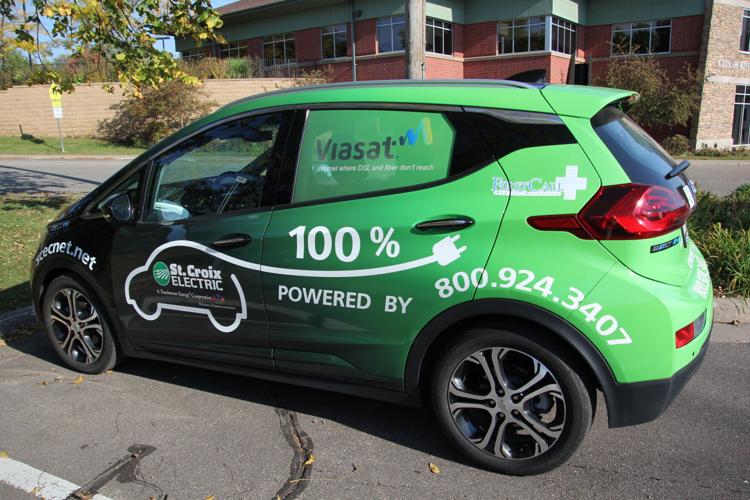 Flying cars and extravagant technology seem far-fetched. But some of what I thought could never exist is sitting in our parking lots, stationed on our roofs and flying in our skies. Last month, I had the chance to give some of this technology a test drive.

I’ve heard sports cars are a blast to drive. Though I haven’t driven one myself, the Chevrolet Bolt Electric Utility Vehicle emphasizes the fun in functional.

What is an electric vehicle?

Electric vehicles use a battery to store the electrical energy that powers the motor. Their batteries are charged by plugging the vehicle into an electric power source.

Plug-in hybrid vehicles are powered by conventional or alternative fuels and electrical energy stored in a battery. The vehicle can be plugged into an electric power source to charge the battery in addition to using regenerative braking and the internal combustion engine or other propulsion source.

St. Croix Electric Cooperative was kind enough to put its Chevy Bolt on loan to me for just over a day as part of its Drive-EV Month celebration in October. Each year since 2018, SCEC has had a drawing for its members. Four winning folks are loaned the SCEC electric vehicle for a weekend (I had the vehicle on a weekday so as not to disrupt this cycle).

In the 1870’s, just 40 years after the invention of the first vehicle running on crude oil, the electric vehicle became practical. William Morisson’s electric vehicle debuted in the U.S. in 1896, which was more of an “electrified wagon” than a car.

Ferdinand Porsche continued the innovation of electric vehicles with the hybrid car in 1901. This early spur of interest was sidetracked by the convenience and affordability of oil. Between 1920 and 1935, electric vehicles all but disappeared.

It was mass-produced hybrid vehicles in the late 1990s, like Toyota’s Prius, that reignited the draw to electric cars.

Tesla launched its all electric sports car company in 2006, 110 years after Morisson debuted his electric “wagon” in the U.S.

In the 1970s, electric vehicles usually had top “speeds of 45 mph and their typical range was limited to 40 miles before needing to be recharged.” Tesla’s cars have a range of over 200 miles and hit top speeds of upwards of 125 mph. And they’re only getting faster.

Electric vehicles today range from a 110-400 mile range on a single electric charge. That is equivalent to about 68-141 mpg. Hybrid vehicles usually have around 12-48 miles of electric range, about the equivalent of 42-133 mpg, according to St. Croix Electric Cooperative. This doesn’t account for the range provided by gasoline.

Covering a wide range of markets, a big part of my job is driving between Hudson, River Falls and New Richmond. I make far too many trips to the gas station every month. In my day and a half with the Chevy Bolt, on loan from St. Croix Electric, I drove about 100 miles.

The best way I can describe it is like driving on air. Between how quiet the vehicle is while it’s running and the effortless acceleration, the ride is smooth.

The Bolt, as many electric vehicles do, has optional regenerative braking. This means that without a charge, you can still charge the battery by capturing energy as you brake. Not only did I not need to recharge the vehicle, I didn’t think about a gas station for 48 hours.

Where can I plug in my vehicle?

To find more locations to plug in, download the PlugShare app or look at the CHARGE map at https://charge.coop/charging-map.

Electric cars, though not a new invention by conventional standards, are not unique to the wealthy anymore. Innovation within companies and organizations like St. Croix and Pierce Pepin Electric Cooperatives have inspired markets to place electric cars in reach for the average consumer. And they're not only making driving electric accessible, but feasible, too.

Now, there are charging stations scattered across the landscape. Apps like PlugShare help consumers find places to fuel up - with electricity.

With the participation and support of various cooperatives, CHARGE has accelerating potential. As CHARGE continues its work to install chargers, St. Croix Electric has been on board -- it “recognizes the need for convenient, publicly available electric vehicle charging stations. We’ve joined with other cooperatives in Wisconsin, Minnesota, Iowa and Illinois to develop level 2 and 3 charging stations within co-op service territories, buildings and CHARGE network.”

Both my parents drive electric vehicles. One a hybrid, the other an all-electric. I’ve driven a Ford Fusion Hybrid, but paid little attention to what it actually meant and how it drove.

“A study from the Massachusetts Institute of Technology Energy Initiative found that the battery and fuel production for an EV generates higher emissions than the manufacturing of an automobile. But those higher environmental costs are offset by EVs’ superior energy efficiency over time,” CNBC reported in a story published in July.

“Currently, the electric vehicle in the U.S., on average, would emit about 200 grams of CO2 per mile,” Sergey Paltsev, a senior research scientist at the MIT Energy Initiative and one of the study’s authors, told CNBC. “We are projecting that with cleaning up the grid, we can reduce emissions from electric vehicles by 75%, from about 200 (grams) today to about 50 grams of CO2 per mile in 2050.”

Though a 100% zero emissions electric vehicle is out of reach at the moment, as production of the vehicle itself requires the emissions of CO2, programs, like the ones in River Falls, provide feasible alternatives to carbon-heavy electricity through solar power.

River Falls Municipal Utilities has been a national leader in clean energy. Recently, the utility was recognized by the Department of Energy’s National Renewable Energy Laboratory for its renewable energy efforts. The Energy Laboratory evaluated the renewable energy efforts of utilities in four categories and released lists of the top 10 utilities across the nation. River Falls customers rank third in the nation for Green Power Participation and fifth nationally for the community’s Green Power Sales rate.

With the exception of 2005, River Falls has achieved at least one top 10 ranking from the Energy Laboratory each year the lists have been released since 2004.

After my 36-hour stint driving a battery-powered car, I parked, plugged and went back to my old fashioned, oil-operated hatchback. Maybe my future will be behind the wheel of an electric vehicle. I hope that future comes soon.